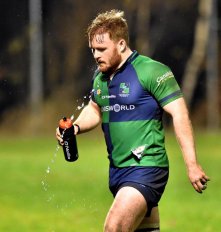 My name is Tristan king a Hooker looking to be involved in playing rugby at a high level.  I have played rugby for around ten years and played at the academy standard for around 4 years but haven't found the right place yet. I have played in bath u17 u18 academy, played for Irish exiles u18 which got me involved in a Ireland international camp being in the extended squad which then gained me a place in the ulster set up which I was in for u19 to under20s training full time like a professional player for two years, i also played for a  All Ireland team called Malone while living in Ireland. Most recently I finished a season in the Scottish BT premiership playing for Boroughmuir 1st XV but looking to progress my rugby professionally. Also have a personal training qualification so would be able to work along side playing rugby.

I am a rugby player who is extremely dedicated and willing to go the extra mile. I play rugby with ball in hand my best contributes are my ability to beat a player with handling and footwork. I also set my set piece as a contributing factor, which is most important to me. I am also a player that likes to get on the ball in defence stealing when possible. I also work hard on my fitness and strength in the gym so I can excel on the field. Iâ€™m looking to take my rugby to the next level. I have played rugby at a high standard and enjoyed every moment of it. I now want to push on further improving each step of the way.
U16su17s Dorset and wilts
u18 Irish exiles
u18 Ireland extended squad
u19s ulster
u20s ulster
Men's all Ireland legue Malone rugby club 2 years
Scottish BT premiership Boroughmuir
Contact information