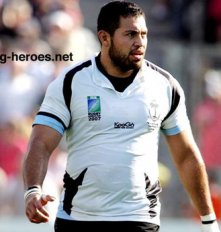 To become the best prop to have represented Fiji on the International stage.
Graham is a mobile prop who prides himself on the execution of his set piece duties. He is a powerful scrummager and his work rate around the field ensures that he is not only defensively sound but also hungry to involve himself during multiple phases of attack.

Grahamâ€™s sheer determination to succeed at international level has resulted in him becoming something of a rock for the Fiji national side. He was involved in Fijiâ€™s admirable campaign during the 2007 Rugby World Cup in France. Scoring the winning try against Wales that saw his team qualify for the Quarter finals where they pushed the eventual Champions South Africa in an entertaining match.

He has continued his high standard with Counties Manukau where he has played for the last 3 years in the NZ national provincial championship.

With a wealth of experience behind him already, Graham still has the ambition to continue playing at the highest International level. He has set himself the goal of playing for a top European club and at only 29 years old Graham still has allot to offer any team that is willing to give him the opportunity.