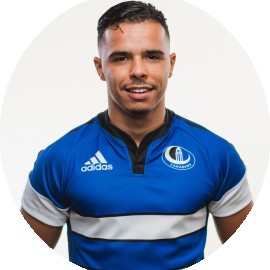 I am a 24 year old rugby player, I just finished my studies as a business analyst in information technology, I am currently looking for a new challenge in life and rugby, I am currently in Canada where I can get a work permit after graduation, I also have French nationality, where I played in the French championship as a hopeful and first team player, I also have the Algerian passport, which allows me to play for Algeria, change is not something that bothers me.

o 8 th final of the French championship (Belascain U23)